Kids may be more inclined to be more active than adults, but you still want to ensure that your child is getting proper exercise. This is especially true considering how now. More than ever kids get glued to their screens. The idea of outdoor games might not occur to them. However, the right running games may be able to pull your kids away from their screens and into the backyard for some active fun.

Here are five running games for kids that will have your young ones not even realizing they’re exercising.

Suitable for: Kids age 2 and up

Tag is one of the first running games kids learn to play and the simplest. Your children can begin playing tag basically as soon as they’re able to run fast, and it can be played with as little as two kids. 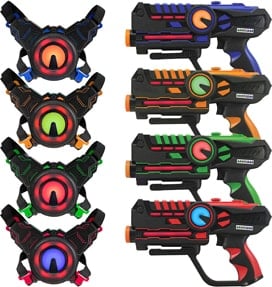 If you can predict your kids will get bored of tag rather quickly, try investing in home laser tag equipment. Laser tag is the ultimate fun running game for kids. The ArmoGear Laser Tag set of four guns and vests will bring your kids’ game of tag to a new level. You’ll be able to turn your backyard into a laser tag arena and let your kids get tactical and competitive. They can play day or night, and the whole family can easily join in for this fun game.

Suitable for: Kids age 8 and up

A regular game of tag can only entertain kids for so long, and older kids will get over it quickly. Capture the flag is essentially a variation of tag, but it is more challenging. This outdoor activity can get competitive, and it is a kind of physical activity that the whole family can participate in. 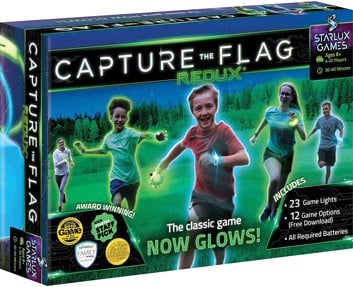 If you want to make things more interesting, try using this Glow-in-the-dark Capture the Flag Redux Kit . It has everything you need to play. It even allows you to play in different ways, so your kids will never be short of running games to play.

Suitable for: Kids age 3 and up

If you don’t already have a soccer ball, definitely consider getting one. A kid with a soccer ball can stay entertained for quite a while. Soccer is the most popular and most familiar sport in the world. The concept is simple, and it’s a very active sport, making it a great running game for kids. 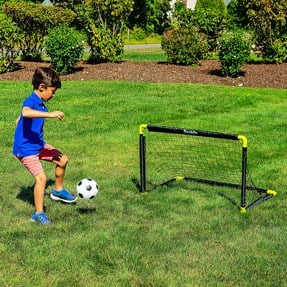 You can simply purchase a mini-soccer net to have your kids practice their shooting accuracy, although they don’t necessarily have to do a lot of running for that. If you have more than one kid, encourage them to play a one-on-one game of soccer. There are many other ways that kids can be entertained by a soccer ball.

Try soccer drills which will not only provide them with ample exercise but will also develop their skills.

Scavenger hunts are an excellent way to bring out the explorer side of your kids. They can keep kids entertained for hours.

If you have a big enough backyard, choose objects that are far apart to avoid having your kids find everything in one corner. Kids may end up doing a lot of running just because of the excitement of finding the next object, but if you make it competitive, you can turn a scavenger hunt into a race. 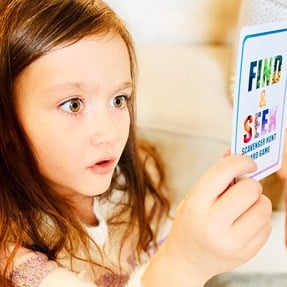 The Hapinest Find and Seek Scavenger Hunt Card includes 35 cards, requiring your kids to find objects that match the description. Your kids will not only get a good amount of exercise, but they’ll also end up discovering nature.

Suitable for: Kids of all ages

If your goal is to get your kids to exercise, there’s no reason not to keep it simple. Kids can get competitive, and sometimes they enjoy a classic race.

Even teenagers can get in enough of a competitive spirit to race their friends. If you don’t have enough space for a race in your backyard, your children can easily do this in a park or in a soccer field. 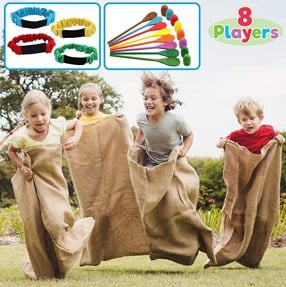 If you want a  fun running game for kids that’s more interesting than a simple race, consider doing an egg and spoon race. This kind of race will also challenge your kids to keep their balance. You can even switch things up by hosting a potato sack race. They’ll be running instead of jumping, but that’s still a good workout!

With so many different options for running games for kids – we haven’t even mentioned water games or the plethora of activities utilizing a hula hoop – you should have no problem encouraging your kids to get some exercise this summer.

Source: https://bouncebackparenting.com/fun-running-games-for-kids/
We use cookies to ensure that we give you the best experience on our website. If you continue to use this site we will assume that you are happy with it. Ok